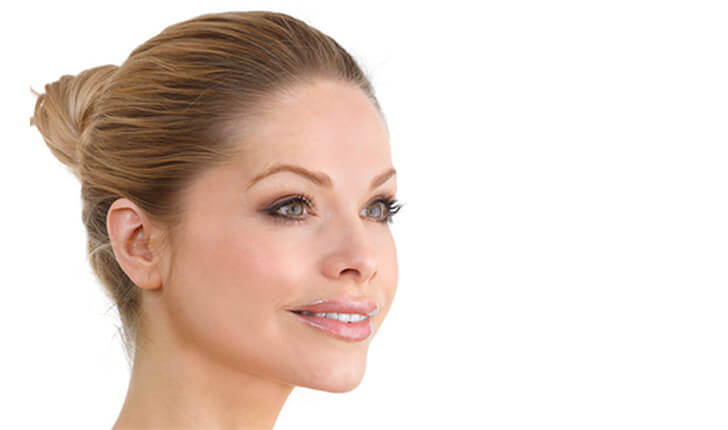 As you age, the skin on the face begins to lose tone and elasticity as collagen and elastin production depletes. This is a result of the ageing process, but can be further compromised by environmental damage, overexposure to the sun and smoking. This presents as wrinkling and sagging skin.

Fat tissue is also lost as you age and there is a loss of volume in the cheek, lip and jawline area with the formation of sunken cheeks, folds around the mouth and nose and jowls to appear on the jawline.

The brow can also descend causing a tired or angry look and heaviness to the eye area. The neck can also be affected with loose skin and excess fat obscuring a taut and defined neckline as well as marked horizontal bands across the neck.

Am I a suitable candidate for a facelift?

Many of these ageing changes to the face can be treated with a facelift, while others may require adjunctive facial surgery procedures such as a brow lift, neck lift or blepharoplasty.

Some patients may require a number of facial cosmetic surgery procedures to be combined for best results. Non-surgical rejuvenation treatments can also be used for the optimal outcome.

During your consultation, Mr Tulley will assess the nature and extent of your facial ageing and advise you on whether a facelift is the appropriate procedure for you. A facelift will lift and reposition the tissues of the face to produce a more youthful and refreshed appearance. The aim is always to produce a truly natural rejuvenation, rather than make you look significantly different.

What happens during the SMAS facelift surgical operation?

A SMAS facelift refers to the tissue layer of the face which will be operated on. This is the superficial muscular aponeurotic system or this type of facelift is commonly called a SMASectomy or SMAS facelift. In patients with a very slim face, a variation on the technique may be used, called a SMAS plication.

The tissues in the SMAS layer are repositioned and reshaped, before the overlying skin is redraped and any excess skin is trimmed.

This is the optimal technique for correcting sagging skin and facial muscles and can deliver very natural and long-lasting results.

Which procedures can be combined with a facelift?

As ageing changes are rarely restricted to one area of the face, Mr Tulley will often combine a facelift with an endoscopic brow lift, a blepharoplasty or a neck lift, to achieve a full rejuvenation of the face.

As well as these other surgical procedures, Mr Tulley can also use non-surgical anti-ageing procedures for optimal results. Fat transfer to the face can produce a more pleasing and youthful contour to the face, as well as improving the condition of the overlying skin.

Liposuction may also be used to remove any excess fat under the jawline to provide more definition.

What scarring can I expect after a facelift?

The extent of scarring is a common concern of men and women contemplating a facelift, but the skin incisions are normally well hidden in the hairline or placed in the skin creases around the ear so should not be noticeable once fully healed.

If most of the skin and muscle laxity is in the mid-face area, it is possible to use a short-scar type technique. The scars are placed in the hairline and just in front of the ear alone. However, if the neck and lower face are affected then the incision will need to be extended behind the ear and into the hair.

Another variation of the short-scar facelift is the MACS lift and this can be a better option for patients that have mild to moderate jowls. After a full assessment, Mr Tulley can advise you on which procedure is most appropriate for you.

A facelift is performed under a general anaesthetic and usually requires at least an overnight stay in hospital. The majority of bruising and swelling will have subsided after the first couple of weeks and then patients usually feel comfortable enough to return to work and normal activities. More vigorous activities and exercise should be refrained from for at least a month and hair colourants should also be avoided during that time.

For advice on whether a facelift is the most appropriate procedure for you, book a consultation with Mr Tulley by calling 020 7183 1559 or using the contact form. 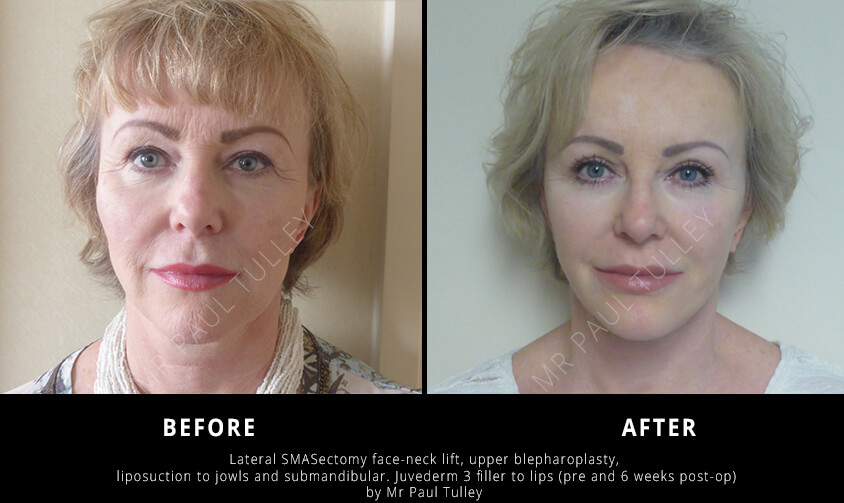 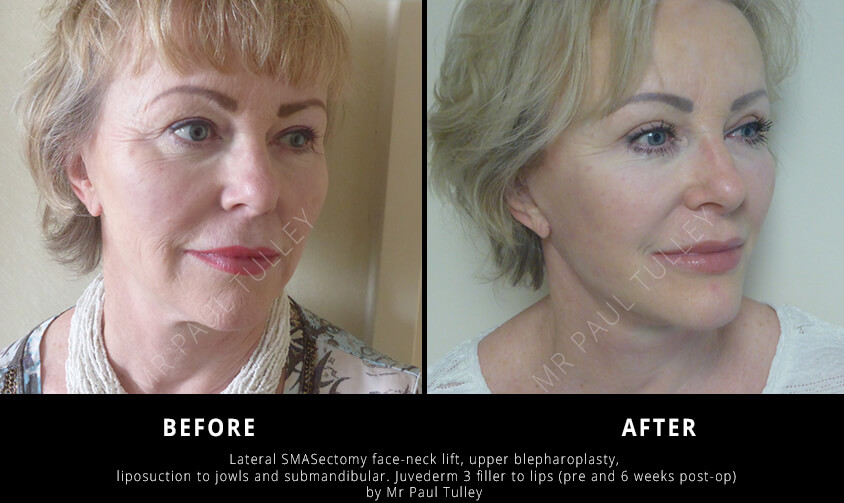